(Baltimore) – One Maryland One Book author Tim Junkin will visit seven counties and Baltimore City to speak about his book, Bloodsworth: The True Story of the First Death Row Inmate Exonerated by DNA. Maryland Humanities kicks off the tour at the Baltimore Book Festival. Following the first stop, Junkin will travel to Washington, Frederick, Harford, Prince George’s, St. Mary’s, Wicomico, and Dorchester counties. Junkin will sign copies of his book at all tour events, which are free. Seating is available on a first-come, first-served basis.

The book was chosen by a committee of librarians, educators, authors, and bibliophiles in February from more than 209 titles suggested last fall by readers across the state under the theme, “Justice.”

“One Maryland One Book brings together a wide range of residents from every corner of the state,” says Phoebe Stein, Executive Director at Maryland Humanities. “Selecting a compelling book that centers on a Maryland native, written by a local author, adds an exciting layer to the program. I’m looking forward to hearing the important discussions this book will generate.”

Tim Junkin says: “I was honored to learn that Bloodsworth was chosen as the 2018 One Maryland One Book selection, a program I applaud for encouraging reading and dialogue throughout our state. The marvel of Kirk Bloodsworth is that he not only survived, but what he became. His ordeal is still, to me, a frightening reminder of hard truths leavened with astonishing miracles.” Bloodsworth will join Junkin for events in Baltimore City and Dorchester County.

Preceding the Baltimore Book Festival appearance, Maryland Humanities will host a reception on September 29 featuring a meet-and-greet with Junkin, as well as food and drink. Tickets to the event, which will take place at Baltimore Center Stage from 5:00–7:30 p.m., cost $60.  The reception is One Maryland One Book’s only event with a fee for attendees.

Charged with the rape and murder of a nine-year-old girl in 1984, Kirk Bloodsworth was tried, convicted, and sentenced to die in Maryland’s gas chamber. Maintaining his innocence, he read everything on criminal law available in the prison library and persuaded a new lawyer to petition for the then-innovative DNA testing. After nine years in one of the harshest prisons in America, Kirk Bloodsworth became the first death row inmate exonerated by DNA evidence. He was pardoned by the governor of Maryland and has gone on to become a tireless spokesman against capital punishment. Bloodsworth’s story speaks for hundreds of others who were wrongly convicted and have since been released, and for the thousands still in prison waiting for DNA testing. 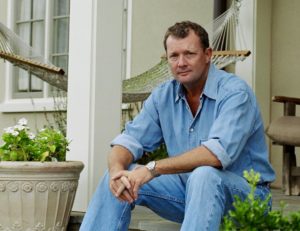 Tim Junkin is an attorney with thirty years of experience as a trial lawyer and advocate of civil rights, an award-winning writer, and a teacher. He spent much of his boyhood in Talbot County, graduating from Easton High School. Today he lives on the Wye River on Maryland’s Eastern Shore. Junkin is the author of The Waterman, Good Counsel, and Bloodsworth. He also founded Midshore Riverkeeper Conservancy—which became ShoreRivers, a Maryland river protection nonprofit—and has received several environmental awards. He graduated from the University of Maryland in 1973 and completed his law studies at Georgetown University Law Center in 1977. He has taught at American University, Georgetown University Law Center, Harvard University Law School, and the Bethesda Writer’s Center.

“Wandering Books”: Where will you find Bloodsworth?

Copies of the 2018 One Maryland One Book selection will be dropped off in public spaces in ten counties beginning in late August as part of “Wandering Books,” a fun campaign that introduces readers across the state to Bloodsworth and the One Maryland One Book program. Anyone can receive clues about where to find books via Maryland Humanities’ Maryland Center for the Book Facebook page or by following @MDHumanities  on Twitter. Libraries in Anne Arundel, Baltimore, Calvert, Charles, Dorchester, Frederick, Harford, Talbot, Washington, and Worcester counties will distribute books throughout their communities. After finding a copy of Bloodsworth, readers log on to www.bookcrossing.com and register their book’s ID number, post a comment or review, then leave the book for another reader to find. Instructions are located on a label inside the book cover. Participation is free. Those who register books will be automatically entered to win a $25 gift certificate to Barnes & Noble after the campaign ends at the end of October, and must include their name and email to be eligible.

About One Maryland One Book

When we read a great book, we can’t wait to share the experience and talk about it with others. That’s one of the joys of reading.

In that spirit, through its Maryland Center for the Book program, Maryland Humanities created One Maryland One Book (OMOB) to bring together diverse people in communities across the state through the shared experience of reading the same book. We invite readers to participate in book-centered discussions and related programs at public libraries, high schools, colleges, museums, bookstores, and community and senior centers around the state.

OMOB programs, including an author tour, take place each year in the fall. A calendar of free public events will be available online beginning this summer.

One Maryland One Book is presented in partnership with Enoch Pratt Free Library and is sponsored by The Institute of Museum and Library Services via the Maryland State Library as well as PNC Foundation and BGE, with additional support from Baltimore City Foundation and M&T Bank.