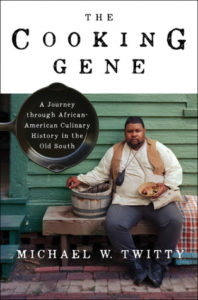 (Baltimore) – Maryland Center for the Book at Maryland Humanities is pleased to announce its 2019 selection for Route 1 Reads, a road-trip-inspired reading list: The Cooking Gene: A Journey Through African American Culinary History in the Old South by Michael W. Twitty. Route 1 Reads explores various genres through the network of state Center for the Book affiliates located along Route 1. This year’s theme is cookbooks and other food-related books.

Twitty, a renowned culinary historian, offers a fresh perspective on race in this illuminating memoir of Southern cuisine and food culture. The Cooking Gene traces his ancestry through food, from Africa to America and slavery to freedom. Southern food is integral to the American culinary tradition, yet the question of who “owns” it is still a provocative touchpoint in our struggles over race. Twitty takes readers to the center of this fight, tracing his family roots and the charged politics surrounding the origins of soul food, barbecue, and all Southern cuisine.

On Twitty’s blog, Afroculinaria, the Maryland author describes himself as “personally charged with preparing, preserving and promoting African American foodways and its parent traditions in Africa and her Diaspora and its legacy in the food culture of the American South.” Twitty is also a Judaic studies teacher. He often speaks about “Kosher/Soul,” which he describes as “Black and Jewish Identity Cooking.” In 2015, Southern Living named him as one of the “Fifty People Who Are Changing the South.”

About Route 1 Reads
Connecting the 2,369 miles of U.S. Route 1 from Ft. Kent, Maine, to Key West, Florida, the Route 1 Reads initiative is a partnership between 16 affiliate Centers for the Book to promote books that illuminate important aspects of their states or commonwealths for readers travelling the major and meandering highway. The initiative was launched at the 2015 National Book Festival. The diverse reading list created by Route 1 Reads highlights each individual State Center for the Book while celebrating the East Coast as a whole.

About the Center for the Book in the Library of Congress
The Library’s Center for the Book—established by Congress in 1977 to stimulate public interest in books and reading—is a national force for reading and literacy promotion. A public-private partnership, it sponsors educational programs that reach readers of all ages through its affiliated state centers, collaborations with nonprofit reading-promotion partners, and its Poetry and Literature Center at the Library of Congress. For more information, visit Read.gov.