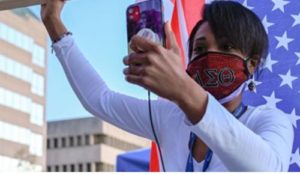 In an election year that saw the largest voter turnout in over a century, civic engagement has become a more salient topic of conversation.

The Patapsco Heritage Greenway, the Historical Society of Baltimore County and the Community College of Baltimore County next year will begin seeking accounts from those who have lived in the region for decades as well as newly minted voters in two projects.

The Patapsco Heritage Greenway project, funded by a $1,975 grant from Maryland Humanities, is part of the state organization’s Voice and Votes Electoral Engagement Project and coincides with a traveling exhibition that will be coming to the Baltimore County Historical Society in Cockeysville and the Community College of Baltimore County’s Dundalk campus next December.