What’s Mine and Yours by Naima Coster

Join us from Mountain Maryland to the Ocean City shore as we read and discuss this year’s memorable story.

Programming takes place this fall from mid-September to mid-November. Ms. Coster will visit select locations across the state for in-person events as part of an Author Tour, from October 2 through October 5. Find times and locations here.

"What’s Mine and Yours" is a multigenerational saga featuring two North Carolina families. They collide in ways that neither is prepared for when Black students from the east side of the county are integrated into the predominantly white schools on the west side. Readers will follow these families over decades as they break apart and come back together. 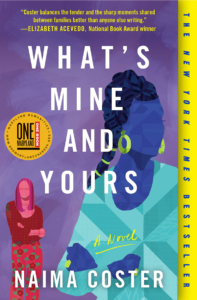