(Baltimore) – Maryland Humanities brings Frederick Douglass, Thurgood Marshall, and Eleanor Roosevelt back to life through its program, Chautauqua: Seeking Justice. Actor-scholars portraying these three giants of social justice will travel to eight counties throughout the state, from July 5 until July 15.

Chautauqua celebrates its 24th season this summer. Living history performances by actor-scholars are followed by question and answer sessions which spark spirited conversation and provide educational family fun. The Thurgood Marshall performance features an excerpt from the George Stevens, Jr. play, Thurgood, and will be followed by a dialogue with Dr. Lenneal Henderson. Henderson, an internationally recognized scholar, brought Marshall to life in the 2010 Maryland Humanities Chautauqua tour. Every Chautauqua performance is free and open to the public and opens with live local musical and theatrical acts.

Chautauqua is supported in part by Old Line Bank, Baltimore County Commission on the Arts and Sciences, Talbot County Arts Council (with funds from the Maryland State Arts Council), and Karen and Langley Shook. Learn more about Chautauqua and see the tour schedule here.

ABOUT THE FEATURED HISTORICAL FIGURES AND ACTOR/SCHOLARS 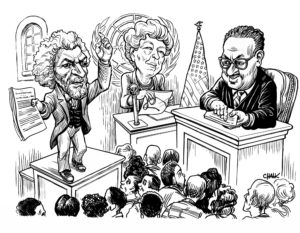 Frederick Douglass (1818–1895)—a writer, orator, and abolitionist—was one of the most important African American activists of the 19th Century. 2018 is the “Year of Frederick Douglass”—the bicentennial celebration of the Marylander’s birth.

Douglass will be performed by Bill Grimmette, a living history interpreter, storyteller, actor, and motivational speaker who has worked in film, television, and on stage throughout the United States and abroad. He has appeared as Martin Luther King, Jr., W.E.B. Du Bois, Frederick Douglass, and Benjamin Banneker at Chautauquas in Maryland, Colorado, South Carolina, and at schools in the Northern Mariana Islands. He has also performed at the Smithsonian Institution, the Kennedy Center, and on National Public Radio. Grimmette has an M.A. in psychology from the Catholic University of America and has done post-graduate work in education at George Mason University.

Susan Marie Frontczak—who has given more than 700 presentations as Marie Curie, Mary Shelley, Irene Castle, Clara Barton, and Eleanor Roosevelt across 38 of the United States and abroad in her 17 years as a living history scholar—will portray Roosevelt. Frontczak says her biggest challenge with Mrs. Roosevelt is to choose what pieces of her immense life to include in any given presentation and so has developed four distinct programs to explore different aspects of Roosevelt’s life. She also works with both adults and youth to develop their own living history presentations, including authorship of the Young Chautauqua handbook for Colorado Humanities.

Thurgood Marshall (1908–1993)was a civil rights activist from Baltimore who broke barriers as the lead NAACP attorney in Brown v. Board of Education and as the first African American Supreme Court Justice.

Dr. Lenneal Henderson is a Visiting Instructor at the College of William and Mary. He is also an Assistant Dean for Civic Engagement and International Affairs; Distinguished Professor of Government and Public Administration and Senior Fellow at the William Donald Schaefer Center for Public Policy and a Senior Fellow in the Hoffberger Center for Professional Ethics, Emeritus at the University of Baltimore. Dr. Henderson has been a consultant for more than 30 years in the areas of housing, education policy, energy management, and environmental policy. He has appeared as Thurgood Marshall, Martin Luther King, Jr., and A. Philip Randolph in Maryland, North Carolina, California, Texas, Virginia, Colorado and Nevada. Dr. Henderson is a former Board Chair of Maryland Humanities and a current member of the Virginia Humanities board. He received his A.B., M.A., and Ph.D. degrees from the University of California, Berkeley.