The Maryland Humanities Council (MHC) Chautauqua event is less than a month away, and in preparation for the performances, MHC spoke with the scholar-performers headlining the events. The performances run from July 5th to July 15th. This week’s interview is with Gene Worthington, performing scholar of Babe Ruth. We spoke about Babe Ruth’s life, legacy, and what it means to bring Babe Ruth alive through performance. Gene Worthington succinctly summarized Babe Ruth’s importance, and anyone wanting to know more, or even glean questions for the Chautauqua, will enjoy his words.

(MHC) What drew you to Babe Ruth?

(GW) I have had a fondness for baseball since I was a little boy. My parents were always comparing the players of the fifties and sixties to what Ruth had done in his day. I read a lot about him and decided that he was someone of interest who started me on a lifelong loving of the game. As a little boy I wanted to be the greatest ballplayer of all time, and by portraying Ruth, for an hour I get to be. 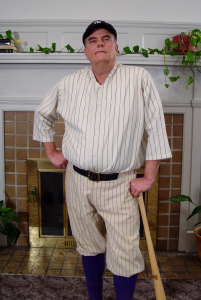 (MHC) How did you research Ruth and prepare for your performance?

(GW) I did most of my research just reading the many books about him and his time period. I have seen film of him and of course the Ken Burns program for PBS.

>> Check out the schedule to see when and where Gene Worthington will be performing!

(MHC) What is the most interesting facet of Ruth’s life? What’s the biggest

public misconception about him?

(GW) The most amazing thing to me was that at 16 he was made into a pitcher and at 19 he was pitching in the Major leagues. The biggest misconception I think is that as he aged he was out of shape and seldom is it mentioned that until the 1920’s he had the body of a young Adonis. As he aged he did tend to gain weight, but he was one of the first to have a personal trainer to keep himself in shape to continue the amazing career he was blessed with.

(GW) There are so many. Questions about how he felt about Black baseball players – he actually played against them. How would he feel about his records being broken – he thought that many would not be broken. And would he have used steroids if he had access. I get this one a lot. I don’t know since there are no records of him taking any drugs. One writer said that the only PEDs that he took were beer and hot dogs.

(MHC) Do you have any favorite performance memories?

(GW) When a little boy wearing a Babe Ruth jersey came up on stage and sang “Take me out to the Ballgame” with me.

(MHC) Are there any other historical figures you’d like to portray?

(GW) I am interested in the teens and twenties, so someone from that era would be fun.

Also joining Mr. Worthington is Gwendolyn Briley-Strand as Wilma Rudolph and Mark Megehee as Jim Thorpe. Follow up on our blog next week to check out the Q&A with Mark Megehee. Also, watch some of our past Chautauqua’s on our Youtube page, and don’t forget to check the schedule to find an event location close to you. We hope to see you at the Chautauqua!