Writing from Paris to John Adams on November 27, 1785, Thomas Jefferson praised the merits of chocolate and gave the prediction that its “health and nourishment will soon give it the same preference over tea and coffee in America.”  Fellow founding father, George Washington, purchased chocolate processed into bars as well as cacao, the product from which chocolate is made.

This heavenly ambrosia emerged in Mesoamerica over the course of thousands of years and eventually made its way from Central America to North America as early as the 17th century.

Mesoamerican Mayans and Aztecs consumed chocolate as a frothy drink. Similarly, chocolate in 18th century North America was most often consumed as a hot drink made from cakes of chocolate. At that time period, chocolate cakes were solid blocks of sweetened chocolate that were often spiced with pepper, cinnamon, nutmeg, cloves, star anise, lemon peel, orange peel, and/or vanilla. These cakes were meant to be scraped into shavings and then mixed with hot water to make the hot drink, or used in other types of recipes.

This is an image of a chocolate cake of that time period: 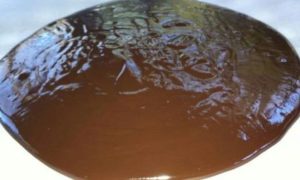 Chocolate cakes were milled in various areas in the North American colonies where the cooler climate was more conducive to working with a product with a low melting point. Baker’s Chocolate located in Dorchester, Massachusetts, started commercial milling of chocolate in 1765 under the name of Wentworth and Storer (today owned by Kraft), and they shipped their products south where there were far fewer chocolatiers. As a matter of fact, only two 18th century chocolatiers south of the Mason Dixon can be documented, one who worked in Charleston, SC and another man, Isaac Navarro, who worked in Annapolis, Maryland, c. 1748-1749.

Whether using purchased processed chocolate from a company such as Baker’s or from a local producer such as Navarro in Annapolis, 18th century chocolate fanatics could indulge their cravings with one of these recipes found in most period cookery books:

What is clearly absent is the popularity of chocolate candy. While chocolate pastilles were made, (a recurring recipe found is for Chocolate Almonds, where the chocolate was formed in the shape of almonds), “eating chocolate” as it was called as opposed to drinking or baking chocolate, was not really popular until technological advances in the 19th century made the candy form of chocolate easier to mold and more palatable to the tongue (less bitter with a smoother finish).

If we could travel back to Isaac Navarro’s chocolate shop in Annapolis in the 1740s, there is no doubt that we would experience chocolate in forms slightly different from what is available today. However, we would definitely recognize this beloved treat despite its altered infusion of flavors and texture no matter the century.

Please see below for links to 18th century chocolate recipes you may enjoy: