March 1917: On the Brink of War and Revolution

This week’s blog post features an excerpt from Will Englund’s recently published book, March 1917: On the Brink of War and Revolution. March 1917 reexamines the tumultuous events and their consequences, as Russia face revolution and the United States entered World War I. 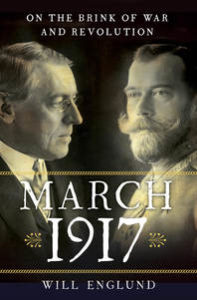 The prospect of war pulled African-Americans in sharply different directions. Loyalty to the land of their birth contended with outrage over Jim Crow. Some, like the great bandleader James Reese Europe, believed the race could occupy its rightful place in society by joining in the fight against Germany. Others saw this as an opportune moment to make demands first, and serve second.

White southerners were spreading stories about German agents plotting with “Negroes” to foment a racial uprising. Two men were arrested in Birmingham, Alabama, on suspicion of doing just that. Black leaders saw these tales as a fiction designed to keep them down.

“I believe Germany is responsible for the war,” wrote W.E.B. Du Bois, of the National Association for the Advancement of Colored People.  “I sincerely hope that your country will be thoroughly whipped.”   The principal of Hampton Institute, Hollis B. Frissell, said, “The negro has always been loyal.” In Durham, North Carolina, the head of a “colored” insurance company said Germany should know “that we stand for a principle and cannot be bought.”

The Crisis, edited by Du Bois, accused Southern whites of trying to portray African-Americans as a menace so that martial law could be declared and migration to the North be halted. “They are playing with fire! The negro is far more loyal to this country and its ideals than the white Southern American. He never has been a disloyal rebel.”

The white authorities, North and South, weren’t making it easy. New York’s 15th Regiment, later to achieve fame as the Harlem Hellfighters, relied on private donations to equip itself and was constantly in danger of failing inspection. A black real estate agent who said he had once served Teddy Roosevelt as a porter at the Hoboken railroad station wrote the former president, complaining that African Americans were barred from National Guard armories, and this made it impossible to train properly.

Charles W. Anderson, director of the Colored Advisory Committee to the Republican National Committee, worried that blacks weren’t seeing anything to inspire them. “There is widespread apathy among the colored people of this city,” he wrote to Roosevelt. “Something should be done at once to arouse them. It fills me with abhorrence to hear them ask, ‘What have we to fight for?’”

The New York Age, a Harlem newspaper, suggested in an editorial that the problem was President Woodrow Wilson. For decades, it said, black Americans had felt that the federal government was on their side, that, especially in the South, federal buildings were sanctuaries from both the brutal and the petty discriminations of Jim Crow. But Wilson “and his administration of Negro baiters” had changed all that, ordering the segregation of the federal government. For the past four years, “the colored American citizen has been avowedly Jim Crowed” by Wilson. That’s why the black men of 1917 weren’t sure they wanted to be targets for German bullets.

The Reverend Adam Clayton Powell, pastor of the Abyssinian Baptist Church in Harlem (and the father of the longtime U.S. congressman), said the crisis was exactly the right time to demand that white America act on Negro complaints.

“The ten million colored people of this country were never so badly needed as now,” he said. They were needed in factories, on farms—and in the Army. “This is the psychological moment to say to the American white government from every pulpit and platform and through every newspaper, ‘Yes, we are loyal and patriotic. . . . While we love our flag and country, we do not believe in fighting for protection of commerce on the high seas until the powers that be give us at least some verbal assurance that the property and lives of the members of our race are going to be protected on land from Maine to Mississippi.’

“If this kind of talk is not loyalty, then I am disloyal; if this is not patriotic, then I am unpatriotic; if this is treason, then I am a traitor. . . . It is infinitely more disgraceful and outrageous to hang and burn colored men, boys and women without a trial in the days of peace than it is for Germans in time of war to blow up ships loaded with mules and molasses.”

About the Author: Will Englund is a Pulitzer, Polk, and Overseas Press Club Award–winning journalist who was a recent Moscow correspondent for The Washington Post and has spent a total of twelve years reporting from Russia.