Highlights of the 2017 Author Tour with Chimamanda Ngozi Adichie 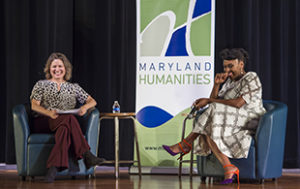 From September 24-26, 2017, Maryland Humanities had the honor of hosting the internationally best-selling and award-winning Nigerian-born author Chimamanda Ngozi Adichie. Ms. Adichie said, “I am so honored to have Purple Hibiscus chosen as Maryland Humanities’ 2017 One Maryland One Book because Maryland is my American home.”  The tour was a rousing success with each of the three stops at Baltimore Book Festival, Calvert High School, and Gaithersburg High School packed with enthusiastic fans.

Throughout the tour Ms. Adichie touched on serious and lighter topics. Feminism was a frequent topic as Ms. Adichie’s TED Talk, “We Should All Be Feminists,” helped catapult her to international acclaim and gain a devoted following. However, her first TED Talk, “The Danger of a Single Story” also highlighted important questions about racism and injustice in America. She also talked intimately about how she came to write Purple Hibiscus and provided writing advice to aspiring writers.

Feminism was the prevalent topic when Ms. Adichie was at the Gaithersburg High School tour stop. She said how she is raising her daughter “to not only think of herself in aesthetics, but that her body is something that does things”. She wanted everyone in the audience to know “feminism is not just for women. If we lived in a feminist world, both men and women would benefit.”

One of Ms. Adichie’s most powerful quotes during the tour was on Sunday, September 24th at the Baltimore Book Festival, where she told the audience to “point out injustices in small, domestic spaces,” whether it be regarding racism, sexism, or any of the other “-isms.” When Chimamanda moved to America to attend college she said, “I didn’t want to be black when I learned what it meant to be black in America, until I did more research and when I knew more of the history of African-Americans, I began to fully embrace my black-ness.”

Ms. Adichie wrote Purple Hibiscus her third year in America and wrote it as an “ode to homesickness, to nostalgia” and said she “wrote about the things I care about.” She laments about what makes Purple Hibiscus different from her other works: “there are themes in the book about depression and toxic masculinity that I didn’t have language for when writing it…there is a poetry that I don’t have in my other books…I revisited it and realized, I’m no longer that writer. But I also thought ‘not bad’.”

At each stop Ms. Adichie had great advice for blossoming writers, and the main advice she had was to read! “I think reading matters. It’s also important for children to see their parents read.” The iconic piece of advice, which she offered at all three stops, was “don’t write what you don’t know or at least what you haven’t researched.” She also advised to “read everything. Read at least a couple chapters of what you don’t like. Just start writing.”

Ms. Adichie herself said she is “endlessly curious, interested, and an endless student,” which perfectly coincides with Maryland Humanities’ mission of making Marylanders life-long learners and the 1,500 people that listened to her speak throughout the tour have hopefully taken her messages to heart.