What would you do if it cost $90 to send a card or letter? What could transpire if six months passed between the time you sent it off and the time it arrived – if it did at all?  In the middle of the 19th Century, just before the Civil War, the US Government had an idea about sending mail across the continent.  All it needed was a bunch of young people, a fleet of speedy horses, vision and some good luck. In one of over sixty Inquiry Kits, Maryland Humanities explores the impact that the Pony Express had on communication during America’s Westward expansion. 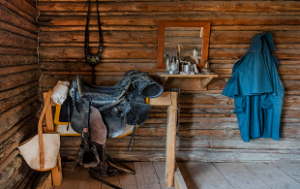 Here’s the job ad: Seventy-five young men wanted. Must be light, strong, fearless and cautious. Must be hard-riding, quick-thinking and have a determined soul.  Must be able to perform this mission despite hardship and perils.  Must be willing to work in brutal weather, long hours, night and day and be away from home for extended periods of time.

The Pony Express wanted to carry the mail the 2000 miles between St. Louis, MO and Sacramento, CA and it took a specific type of person to do it. Each young man rode at breakneck speed along the trail between outposts fifteen miles apart, stopping only long enough to trade his exhausted horse for a fresh one. A rider was allotted three horses before handing the mail off to another rider. Every piece of mail was transferred between riders for about nine days each way.

Early in the development of our western frontiers, the Pony Express was the only method of carrying mail quickly across the plains and over the deadly Rocky Mountains.  It opened trails for passenger coaches and created the on-going connections between the California gold-miners and the settled parts of the nation. The Pony Express helped hasten Western Expansion and the building of the Transcontinental Railroad, with just a few dozen skinny young men over the course of only 18 months from April 1860 – October 1861.

A part of the unit entitled Geographic and Economic Change Shape the Nation, the “Pony Express” Inquiry Kit provides a glimpse into the harsh conditions that surrounded riders, their meager supplies and the rough stations where they could gather their strength for the next ride. It also offers some little-known background about Buffalo Bill’s connection to the Pony Express, Native American tribes the riders came into contact with, and the connection between the Pony Express and the first Transcontinental Telegraph. Explore the kit and imagine the danger and the drive that once was a part of a daily mail route. You may never look at a stamped envelope the same way again.

TPS Inquiry Kits are the result of a partnership between Maryland Humanities, Maryland Public Television, and the Maryland State Department of Education, and are funded by the Library of Congress Teaching with Primary Sources program. This new collection of Inquiry Kits allows students to select a research topic of interest and evaluate themed primary sources from the Library of Congress. From life in the early American colonies to the modern-day life in the United States, the Inquiry Kits examine social studies/history themes and align with Maryland curriculum units.  Inquiry Kits are great for use in classroom activities, or as starter kits for History Day projects.