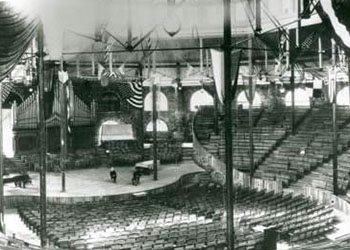 Chautauqua – “The most American thing in America”

“The most American thing in America.”

So said President Theodore Roosevelt of the education movement known as Chautauqua. The origins of Chautauqua (pronounced “Shuh-TAW-Kwa”) can be found in the Chautauqua Lake area of upstate New York, where the movement began in 1874. Initially organized by Methodist minister John Heyl Vincent and businessman Lewis Miller as a Methodist summer retreat, Chautauqua quickly grew to be a popular source of adult education as the lectures presented the latest thinking in politics, economics, literature, science, and religion.

By 1900, more than 400 summer communities had developed from the original Chautauqua model, and touring companies presented lectures, debates, and performances at sites throughout the country. However, the growing popularity of radios, movies, and cars in the early twentieth century led to the gradual decline in the Chautauqua movement.

In Maryland, where the tradition dates back to the late nineteenth century when Chautauquas took place

at Mountain Lake Park in Garrett County and at Glen Echo Park in Montgomery County, Maryland Humanities launched the modern Chautauqua in 1995 at Garrett College. The theme of the first Chautauqua was “Democracy in America” and featured seven historical figures: Maria W. Stewart, P.T. Barnum, Alexis de Tocqueville, Harriet Beecher Stowe, Horace Greely, Domingo Faustino Sarmiento, and Frances Wright. Since then, this popular program has spread to other parts of the state, educating and entertaining thousands of Marylanders every summer.

This summer, Chautauqua enters into its 22nd season as we celebrate the 100th anniversary of the Pulitzer Prizes as three Pulitzer winners come to life on the Chautauqua stage.  Duke Ellington, the incomparable showman, was one of the greatest composers of the twentieth century with a career that spanned over fifty years. Gwendolyn Brooks, the first African American to win a Pulitzer Prize, captured the black experience in America through her poetry. Ernest Hemingway, one of the greatest American literary figures of the twentieth century, continues to influence modern literature with his trademark style of simple yet perceptive prose.

Join us and your fellow Marylanders this July at seven sites across the state with “Masters of their Craft.”

One thought on “Chautauqua – “The most American thing in America””