Our Chautauqua event is less than a month away, and in preparation for the free performances, we spoke with the scholar-performers headlining the events. The performances run from July 5th to July 16th. This week’s interview is with Tevin Brown, performing scholar of Duke Ellington. 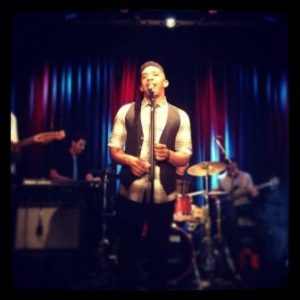 Q. What drew you to music as your profession?

Brown: I actually started out in musical theatre at the Arena Players when I was 10 years old. My elementary school went to see a play there, and once I saw the actors I knew that was what I wanted to do. A few years later, after being in their Youtheatre program, it became clear that music was my strongest talent. From there I got accepted into the Baltimore School for the Arts for music, and I knew that music was what I wanted to do. I knew it because I couldn’t imagine life without singing or playing or being a part of a choir or being on stage.

Q. Which musician(s) inspire you the most?

Brown: Because I sing and play piano, I am drawn to artists who do the same. My biggest inspirations are John Legend, Stevie Wonder and Donny Hathaway.

Q. What is your favorite Duke Ellington song and why? How does it speak to you personally?

Brown: This is such a hard question! If I was forced to choose, I would go with “Sophisticated Lady”. The chords are very lush with a melody that bends back and forth like a lady. The imagery that Duke used is perfect in this tune, and the lyrics tell the story of a beautiful woman who has lost her lover and is hurting. She doesn’t show it on the outside, but “when nobody is nigh, you cry”. It is a love story that all of us can no doubt relate to.

Q. How would you describe jazz music and what makes it different from other types of music?

Brown: Jazz music is America’s original music. Unlike just about every other genre, jazz was birthed and developed here in America and it holds a special place in my heart for that. One of the biggest differences between jazz and other genres is the inherent freedom that musicians have when playing jazz. A jazz musician is allowed to play the same tune 5 different times and have them all sound different. That is what makes jazz special; because of the free nature of the music, emphasis is placed on the artist and their style more than the composer/songwriter.

Q. Music can be viewed as a type of storytelling. If so, what story do you think Duke Ellington was trying to convey with his music?

Brown: I think Duke was telling a unique story of Blackness as it was perceived by him. Ellington was an innovator who broke the mold of what the Black musician/composer could do. Starting out as a “swingtime” bandleader, his early work gained its own nickname of “jungle music” because of the wild and unorthodox sounds his band would create. From there, he stepped into writing in more classical forms (suites, symphonies, etc.) and redefined the way a jazz composer is viewed. All of this was done alongside telling stories of love (In A Sentimental Mood), pain (Don’t Get Around Much Anymore), and cultural pride (Black and Tan Fantasy). Duke’s story was very unique indeed.

Q. What surprised you the most in your research on Duke Ellington?

Brown: What surprised me was how much help Duke Ellington received from his peers and friends along the way to stardom. In his autobiography, Duke mentioned on multiple occasions that whenever he was faced with hardship or a crossroads in life, there was someone there to show him the way to go. This surprised me because I assumed that Duke Ellington was more of a lone wolf, as most composers tend to be. On the contrary, he was a people person and was rarely alone.

Q. Do you see or hear Ellington’s influence on contemporary music?

Brown: Unfortunately, I am hearing less and less of his influence in the music of today. Most of this is due to the new technology that is being used to make music. For example, Duke never used an electronic keyboard in any of his music and there was no such thing as a laptop. Today, all you need is GarageBand and a microphone and you can create as much music as you would like. I think Duke was living and writing music in a different world, and that is why we don’t hear much of his influence in music.

Q. If you could go back in time to meet Ellington, what would you say to him?

Brown: I would thank him for all that he has done for music. I believe that without the music of a Duke Ellington, the progression of music would be at least twice as slow. I cannot imagine what limitations we as musicians would still have if it weren’t for Duke breaking sound barriers in the way that he did. I would also ask him to give me a piano lesson. There would be so much to learn from a jazz giant like Duke!