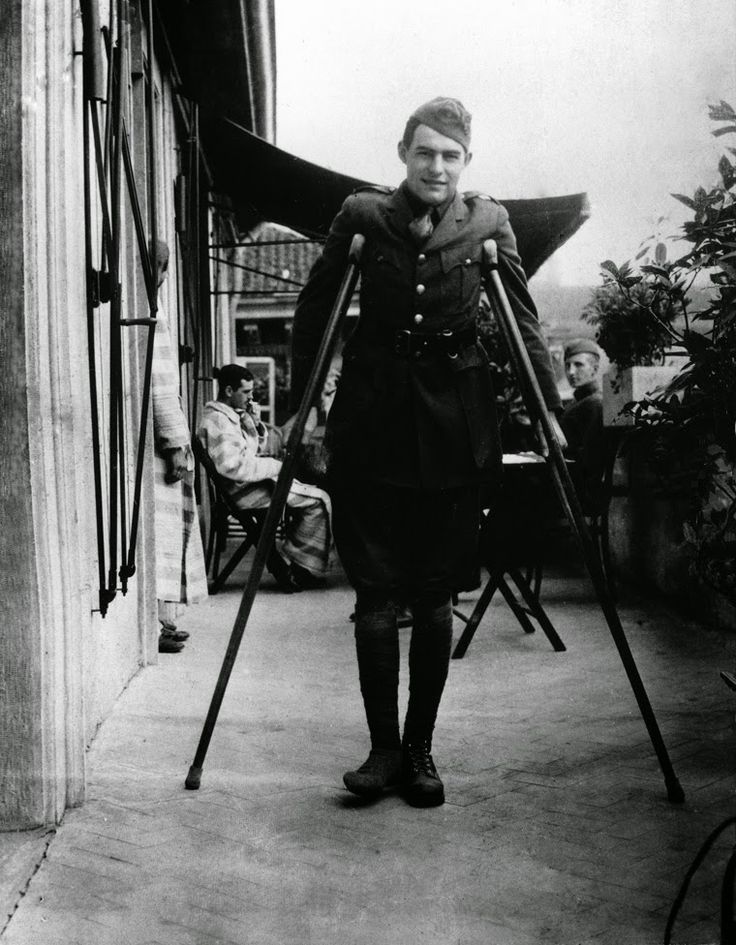 Nearly one hundred  years have passed since 18-year-old Ernest Hemingway’s rescue ambulance was struck by a mortar shell in Schio, Italy during World War I. He had been eager to serve but failed to make the US Army’s cut due to vision problems, ultimately finding his place in the war effort as an ambulance driver in the American Red Cross. Hemingway redeemed himself with sheer tenacity, a characteristic which became so engrained that it ultimately defined him.

Though badly injured and knocked unconscious by the mortar explosion, Hemingway continued to drive his ambulance. Careening through Schio, he focused on finding injured soldiers—his Italian compatriots. Ted Brumback, another American ambulance driver, wrote Hemingway’s father to say that “despite over two-hundred pieces of shrapnel being lodged in [Hemingway’s] legs, he still managed to carry another wounded soldier back to the first aid station; along the way he was hit in the legs by several machine gun bullets.” Whether or not he carried another wounded soldier was never confirmed, but this much is for certain—Hemingway refused to sit idly once injured, was struck again by enemy fire, and taken to recover in Milan. He was later awarded the Silver Medal of Valor from the Italian government.

Clearly Hemingway had a sensational war story. But is that the reason his works persist as examples of war literature? Maybe not. Perhaps their success continues because Hemingway embodied his experience and consistently incorporated it into his work. Hemingway never stopped writing about his wartime experience. His time as an ambulance driver and his involvement in the Spanish Civil War (during which he narrowly escaped death when three shells exploded in his hotel room) never seemed to leave his consciousness. From “Big Two-Hearted River” (1925) to The Snows of Kilimanjaro (1936), Hemingway’s works continue to be reading-list staples in college classrooms, book clubs, and Veterans Book Groups, a program of Maryland Humanities. His novel A Farewell to Arms (1927), which owes much of its story arc to Hemingway’s affair with a nurse at the hospital in Milan, and For Whom the Bell Tolls (1940), the tale of an American journalist’s commitment to revolution, are perennial examples of World War I and the Spanish Civil War literature, respectively.

Hemingway’s trademark minimalist style exemplifies the matter-of-fact nature of war, from the battlefield to the homefront. But he was hardly the only critically-acclaimed veteran-turned-author. John Dos Passos, also an ambulance driver in World War I and a revolutionary in the Spanish Civil War, wrote the brilliant novel Three Soldiers (1921), which changed the way American citizens thought about World War I. The poems of E. E. Cummings, yet another World War I ambulance driver, often wrestled with concepts of struggle, conflict, and doom. The experience of war solidified what Cummings wanted to immortalize in his poetry: the power of humanity.

But, more than half a century after his death, Hemingway continues to be the author who acts as a literary lifeline to the war experience. Perhaps part of this status is due to his tenacity. The commitment that drove Hemingway to return to his ambulance is the same stubborn idealism that drove him to eschew his American identity as part of the “Lost Generation,” to join Spain’s Republican resistance, and to marry four very different women. This same endurance and stoicism propelled Hemingway beyond fame into a cultural legend. Ultimately, it brought its own struggles and, arguably, his demise.  But the duality of Hemingway’s tenacity is what makes him irresistible as a writer and a character. Unexpectedly, it also makes Hemingway and his characters relatable. Like his life, Hemingway’s stories vacillate between obstinacy and tenderness, between rapture and pain. His characters grapple with love and death, and the will to continue on. In Hemingway’s stories, we can experience war. But, more importantly, we relate to the veteran because his story is a human one. We discover a beautiful struggle to survive—and find the tenacity to tell the story.

Hear from Ernest Hemingway, portrayed by actor and playwright Brian Gordon Sinclair, during the 2016 Chautauqua program, July 5–14. Get the full schedule of performances and more on our Chautauqua page.