For the 23rd season of our Chautauqua living history series, we are commemorating the 100th Anniversary of the United States’ entry into the Great War as three World War I-era figures come to life on the Chautauqua stage. As Chautauqua approaches, we will hear from the three scholar-actors who will perform at seven sites across Maryland this July. Next up is Bill Grimmette, who previews his performance as W.E.B. Du Bois.

What drew you to this character?

W.E.B Du Bois was a literary leader, rather than a charismatic one. I was studying Frederick Douglass, Booker T. Washington, and Martin Luther King, Jr. when I noticed a single literary thread connecting them all. Du Bois had written most eloquently about all three, which led me to ask who he was. I had read some of his writings in school but never really thought of him as a leader. He was rarely the top person in any organization but as I looked more closely, his writings had immeasurable influence on many leaders both friend and foe. So, I had to discover who this swashbuckling pen-swordsman was and how he came to hold that position.

How did you research your character and prepare for your performance?

I became fascinated by the Harlem Renaissance back in the 1980s when doing a TV show for Howard University Television with Ossie Davis and Ruby Dee on Zora Neale Hurston. In it, they mentioned that W.E.B. Du Bois was one of the originators of that movement and I became intrigued as to how. Du Bois was a writer and so researching him began with reading most of what he wrote. But one year I saw that David Levering Lewis had written ABOUT Du Bois and I wanted to know what others had to say about him. This opened my eyes wide to the faults as well as the fruits of this most prolific literary man. The one book that galvanized my fascination was his tome entitled, Black Reconstruction in America 1860-1880.

What is the most interesting facet of your character’s life?

This question about Du Bois could elicit an answer that says from 1868 to 1963 because he was interesting from start to finish. However, for me his 1920 essay on the Damnation of Women, published in Dark Water: Voices from Within the Veil, is perhaps, for me, his finest moment. In this he waxes nostalgic about the women in his life who made him who he is and then ties this topic to world history. So as WWI is being fought as “the War to End All Wars” and the one that would make the world safe for democracy, Du Bois is challenging one of this great democracy’s central weaknesses: the damnation of our women.

Did you learn anything new or surprising about your character through your research?

I was intrigued by a story he told about joining Booker T. Washington on a trip to New York City to visit Andrew Carnegie. Du Bois was skeptical of Mr. Washington’s intentions and thought him to be a “sell-out” to the monied interests. So he was surprised when Mr. Washington asked him if he had read a book that Carnegie had written. Du Bois replied no, to which Mr. Washington retorted, “You should read it. HE likes it.” This is when Du Bois discovered that Mr. Washington was a politician of the highest order and not everything is what it seems.

This year our Chautauqua series commemorates the 100th Anniversary of the United States’ entry into the Great War. What do you think your character’s legacy was in World War I?

Like Frederick Douglass for the Civil War, Du Bois became the greatest champion for recruiting Black soldiers to fight. He thought that if Blacks did not fight, a victory would further alienate and “otherize” them as non-Americans. And if they did fight, Du Bois contended, the chances of their inclusion in the abundance of America was increased; not guaranteed, but improved. He wrote an essay in Crisis magazine, the publicity arm of the newly founded NAACP , in which he persuaded African Americans to “put aside your special grievances for now..” and join the fight for democracy. His greatest regret came from his simultaneous request for a commission in Military Intelligence, which led many to believe his recruiting efforts were self-serving.

Experience Bill Grimmette’s performance as W.E.B. Du Bois at a Chautauqua location near you, beginning July 5! 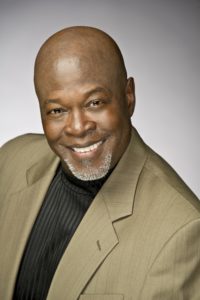 Bill Grimmette is a living history interpreter, storyteller, actor, and motivational speaker who has worked in film, television, and on stage throughout the United States and abroad. He has appeared as Martin Luther King, Jr., W.E.B. Du Bois, Frederick Douglass, and Benjamin Banneker at Chautauquas in Maryland, Colorado, and South Carolina and at schools in the Northern Mariana Islands. He has also performed at the Smithsonian Institution, the Kennedy Center, and on National Public Radio. Grimmette has an M.A. in psychology from the Catholic University of America and has done post-graduate work in education at George Mason University.