Top Three Titles for One Maryland One Book 2020

Governor Larry Hogan has declared 2020 “The Year of the Woman in Maryland,” which celebrates the 100th anniversary of the 19th Amendment that gave many women the right to vote. Our One Maryland One Book top three titles are all written by women authors this year. Esi Edugyan’s Washington Black, Tiffany D. Jackson’s Monday’s Not Coming, and Lisa See’s The Island of Sea Women are the three books still under consideration for this year’s theme of friendship. 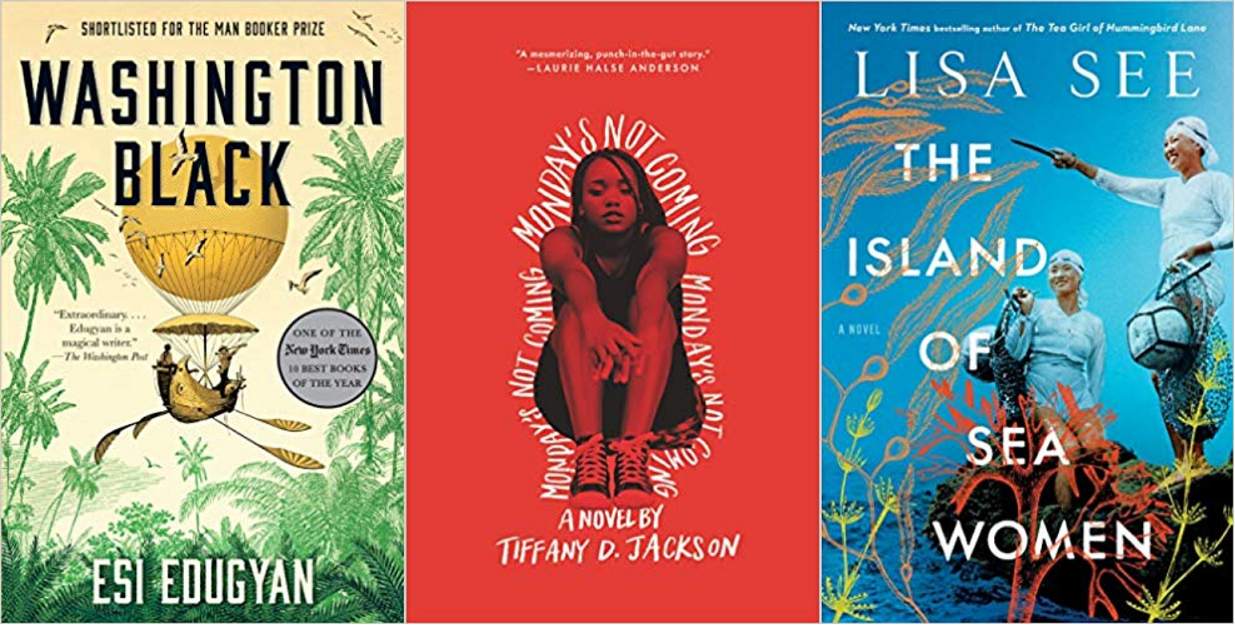 Washington Black, which was named one of the Ten Best Books of the Year by The New York Times Book Review, follows the titular character, an eleven-year-old enslaved boy named “Wash,” on a journey with his newfound master, Titch, who happens to be an abolitionist. From the plantations of Barbados to the Arctic North, through Europe to North Africa, the book shows the reader the evolution of Wash and Titch’s relationship, presenting the question:  Can their connection be called a friendship? Black was longlisted for the Man Booker Prize, named a Los Angeles Times Book Prize Nominee for Fiction, and an Andrew Carnegie Medal Nominee for Fiction, among other prestigious honors.

Monday’s Not Coming, a Lincoln Award Nominee, 2019 Walter Award Honor Book, and winner of the Coretta Scott King-John Steptoe Award for New Talent, is about the friendship between middle school-aged girls Claudia and Monday. The history of the girls’ friendship is told through flashbacks, so the reader feels the impact Monday’s disappearance has on Claudia. She reaches out to Monday’s family and no one will tell her where her best friend has gone. After weeks go by, Claudia knows something is really wrong and in her own investigation into Monday’s disappearance she discovers shocking truths about Monday’s life. Inspired by true events that happened in Washington, D.C. and Detroit, Monday’s Not Coming explores what happens when a child of color goes missing in the United States.

The Island of Sea Women takes place on the Korean island of Jeju, home to the haenyeo (female divers) who live in a matrifocal society, where the women are head of the household and the men take care of the home and children. The novel focuses on the long-enduring friendship between Mi-ja and Young-sook; it follows them through marriage and becoming mothers along the backdrop of the Japanese occupation, World War II, and the Korean War and its aftermath leading up to 2008, where an older Young-sook reflects on the past. Strong outside forces will push the bounds of Mi-ja and Young-sook’s decades-long friendship.

Only one of these three titles will be this year’s One Maryland One Book, although we recommend adding all of them to your to-be-read lists! Regardless of which book ends up being the book, readers will be exposed to a strong bond between characters they won’t soon forget.

Subscribe to our e-newsletter or follow us on social media to find out our final pick in March.