Top Three Titles for One Maryland One Book 2021

This year’s theme for One Maryland One Book is “Hope” and we want to share the three titles that our Selection Committee narrowed it down to! All of the books this year are written by Black men. Only one of the following books will be our pick: Uncomfortable Conversations with a Black Man by Emmanuel Acho, The Book of Delights by Ross Gay, and Five Days: The Fiery Reckoning of an American City by Wes Moore with Erica L. Green. 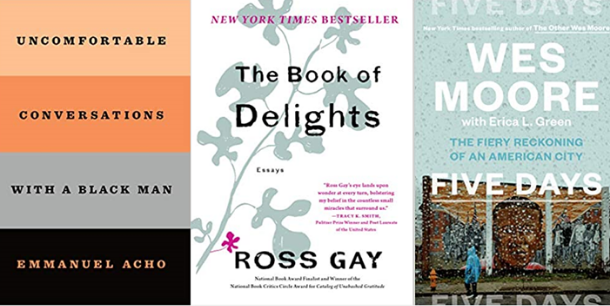 NFL linebacker-turned-Fox-Sports-commentator Emmanuel Acho began a series of videos in June 2020 titled Uncomfortable Conversations with a Black Man. He saw the need for, especially white Americans, to have difficult conversations regarding race and racism in America. In his videos he’s hosted actor Matthew McConaughey, NFL Commissioner Roger Goodell, and four members of the Petaluma, California Police Department. Acho sees these conversations as a way for white people to ask questions that they normally would not ask a Black person for fear of saying the wrong thing. His goal is to begin dialogue towards healing and transformation.

Oprah Winfrey saw the series and asked Acho to adapt it into a book, which has now been a New York Times Bestseller since November 2020. Chapters of the book open with questions that Acho received from viewers. Historical context revolving issues such as bias, voter suppression, and interracial relationships are included; Acho also shares anecdotes from his childhood, growing up in Dallas, his time at the University of Texas, Austin, and his time in the NFL.

The Book of Delights began as a project for poet Ross Gay. Starting on his 42nd birthday he wrote an essay every day about something he found delightful. About 100 of those essays are collected in Delights: the topics range from nicknames to a praying mantis to what it is like being a Black man in America. Through his journey, he came to realize personal interactions with others was the main source of the delights he collected. The simple things, the subtle things, and even accidental things are what Gay came to be more aware of as he wrote daily about his observances. Something such as a high-five from a stranger was one of the kindnesses he encountered. In an interview with NPR, he confirms that he started writing the essays in August 2016, and in the midst of the election of 2016, Gay was trying to find the light in difficult times. Completing the project in August 2017, he came to realize that in his work going forward, he wanted to capture the joys in life and what connects us to one another.

Five Days: The Fiery Reckoning of an American City by Wes Moore with Erica L. Green captures the aftermath of the death of Baltimore resident Freddie Gray at the hands of Baltimore City police officers in April 2015. The book is told from the perspectives of seven people who were all affected by the events including a Baltimore Police Department captain, the sister of another victim of police brutality, and the owner of the Baltimore Orioles.

The book also chronicles the life of Freddie Gray. Moore says that the underlying conditions that Black citizens in poor Baltimore neighborhoods face on a daily basis—such as poverty, racism, and systemic injustice—need to be addressed. Gray was born months premature and underweight. He was also born addicted to heroin and exposed to high levels of lead as a child, growing up in Baltimore public housing. Moore says the systems that led to the injustice of Gray’s death need to be changed, so that what happened to Gray won’t happen again. In that way, there is hope moving forward, in that those responsible will be held accountable.

Only one of these three titles will be this year’s One Maryland One Book. Although, we do think all three should be added to your to-be read lists! Whichever is selected, these are fascinating nonfiction choices.

Subscribe to our e-newsletter or follow us on social media to find out our final pick in March.